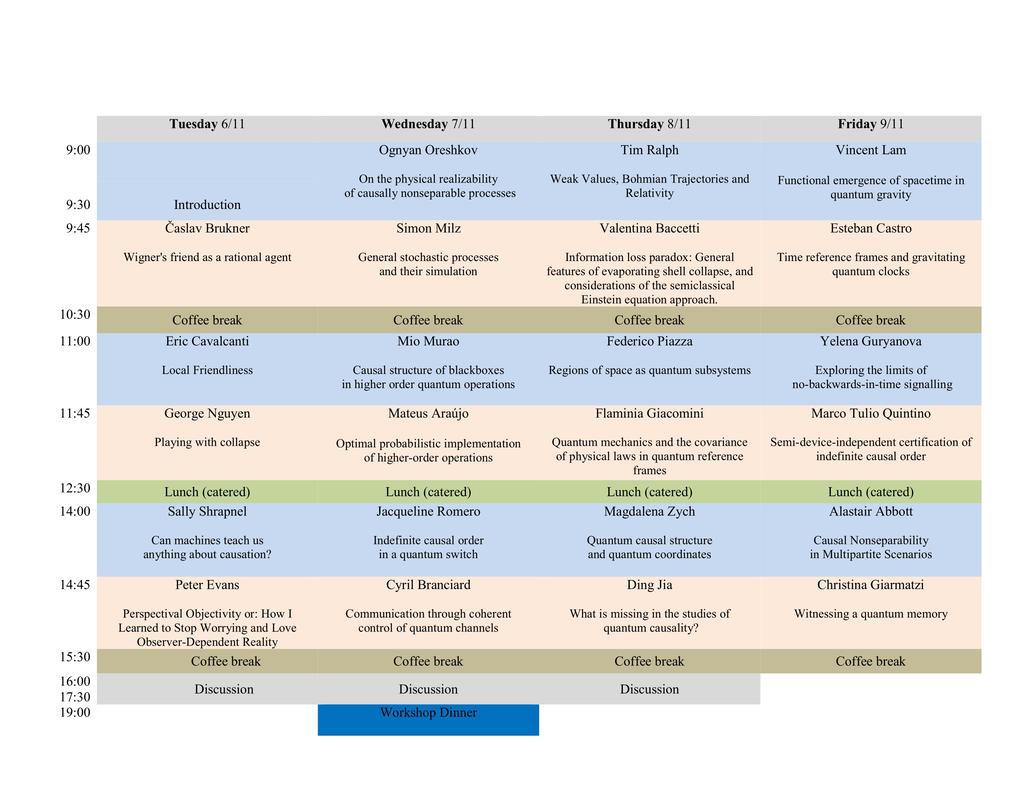 The process matrix formalism allows us to study processes in which quantum mechanics is only assumed to hold locally, but for which there may be no global causal order between events. Such processes may even be physically realisable, as is the case with the quantum switch, which provides computational and communication-theoretic advantages over causally ordered processes. The notion of causal separability -- i.e., the compatibility of a process with a definite causal ordering of events -- is well understood and characterised in the bipartite scenario, as well as the restricted tripartite scenario relevant for the quantum switch.

In the general multipartite case, however, the situation is more complicated, in part due to the possibility of dynamical (classical) causal orders, and multiple, incompatible, definitions of causal nonseparability have been proposed. I will discuss these definitions before motivating and presenting our definition, which turns out to be equivalent to one previously proposed by Oreshkov and Giarmatzi. I will then discuss the characterisation of such processes and show how witnesses for causal nonseparability can be obtained via semidefinite programming.

A completely depolarising quantum channel always outputs a fully mixed state and thus cannot transmit any information. In a recent Letter, a surprising result was shown [1]: if a quantum state passes through two such channels in a quantum superposition of different orders—a setup known as the “quantum switch”—then information can nevertheless be transmitted through the channels. This result was attributed to the indefinite causal order between the channels.
In fact, one can show that a similar effect can be obtained when one coherently controls between applying one of two identical depolarising channels to a target system. Such a situation involves no indefinite causal order; we argue that this result should therefore rather be understood as resulting from coherent control of channels.
Additionally, we find that when quantum channels are controlled coherently, information about their specific implementation is accessible in the output state of the joint control-target system. This allows two different implementations of what is usually considered to be the same channel to therefore be differentiated. More generally, we find that to completely describe the action of a coherently controlled quantum channel, one needs to specify not only a description of the channel (e.g., in terms of Kraus operators), but an additional "transformation matrix" depending on its implementation.

In a recent paper, Caslav Brukner proposed a no-go theorem in an extended version of a Wigner’s- friend scenario, with a goal to demonstrate the impossibility of the existence of observer-independent facts. As part of the proof, Brukner argued that a certain set of assumptions (including the assumption of observer-independent facts) leads to a local hidden variable model, and thereby to Bell inequalities. Here we show however that the assumptions used by Brukner (which we term “Local Friendliness”) do not lead to a local hidden variable model in general, but rather are less restrictive, and lead to a set of correlations that is in general strictly larger than the Bell-local correlations. Although the two correlation polytopes coincide in the particular case of the CHSH scenario, we show that they are distinct already in the scenario of 3 settings per party with two outcomes each. We characterise and explicitly derive the full set of “LF inequalities” that bound the Local Friendliness polytope for this scenario, and demonstrate (both theoretically and in an experiment in development at the submission date for this abstract) that a state can violate a Bell inequality while still satisfying Local Friendliness. Another interesting property of this new set of correlations is that unlike local causality, the Local Friendliness correlations are not contained in the quantum set – there are supra-quantum correlations that do not violate any LF inequality.

Peter Evans - Perspectival Objectivity or: How I Learned to Stop Worrying and Love Observer-Dependent Reality

Bruckner (2018) proposes a no-go theorem for observer-independent facts. A possible consequence of the theorem is that there can be no absolute facts about the world, only facts relative to an observer. This idea has precedent in the history of quantum mechanics, stretching back to Bohr, and including more recent relational and Bayesian approaches. In this talk I argue that, properly understood, this idea has philosophical pedigree also. Working through the examples of colour perception and causality, I show that there is a perfectly reasonable notion of ‘perspectival objectivity’ that can be appropriated to take the sting out of observer-dependent reality.

A challenge present in every experimental setup is to monitor the interaction between some desired system and their environment at many different time steps of an experiment. When the environment does not have a memory such that each interaction is independent of past ones and of the state of the system, we call the process Markovian. In real experiments though, it is often the case that the various interactions are correlated and/or depend on the initial state. Such processes can be simulated by adding an external classical or quantum memory that carries the correlations. Here, we present a technique to verify that a process is non-Markovian with quantum memory using witnesses---a set of measurements that verify the property without the need of full process tomography. A quantum memory witness can be obtained from an entanglement witness of the state that represents the process; we use the process matrix formalism to obtain this state. We apply our method on a physically motivated example where system and environment are initially correlated and later interact according to the Ising model. We present our results of detecting or not a quantum memory for various parameters of the Ising model.


Ding Jia - What is missing in the studies of quantum causality?

Many research programs in quantum gravity seem to suggest a radical picture according to which crucial spatio-temporal features (and possibly even space and time themselves) are not part of the fundamental physical ontology. This talk discusses the main ontological and epistemological worries that may arise in this context and how a functionalist perspective on the emergence of spacetime can help to alleviate these worries.

Supermaps are functions taking maps as input.  Quantum mechanically implementable supermaps are called quantum supermaps and their general properties are formulated by the framework of quantum networks and quantum combs proposed by Chiribella et al.  We consider the implementability of supermaps in quantum mechanics when the input maps are unitaries given as blackboxes and the blackboxes can be used multiple but finite times. We regard such direct implementations of supermaps for blackbox quantum operations with multiple uses of the blackboxes as higher order quantum operations.  We investigate how the causal structure of these blackboxes affects their performance in implementing higher order quantum operations.  We analyze two tasks, quantum learning of a unitary with blackbox references and inversion of blackbox unitaries.  We study three types of causal structure of blackboxes, parallel, sequential and indefinite causal order.

I describe a Newcomb-type decision game based on delayed-choice entanglement swapping. Within a causal-decision-theoretic framework, agents holding different quantum interpretations may assign different expected utilities to their in-game decisions. I show that if Alice and Bob were to play this game, with Alice subscribing to a collapse interpretation—including the “effective collapse” of Everett branching universe—and Bob subscribing to a non-collapse view, then Alice cannot win. The reason is that collapse models are forced to say that no actual entanglement swapping occurs in the delayed-choice case and their prescribed credences will thus not match observed frequencies. This may be generalised to a claim that temporally-local ψ-ontic interpretations are pragmatically irrational.

Ognyan Oreshkov - On the physical realizability of causally nonseparable processes

In quantum mechanics events can happen in no definite causal order: in practice this can be verified by measuring a causal witness, in the same way that an entanglement witness verifies entanglement. Indefinite causal order can be observed in a quantum switch, where two operations act in a quantum superposition of the two possible orders. Here we realise a photonic quantum switch, where polarisation coherently controls the order of two operations, Â and B̂, on the transverse spatial mode of the photons. We show that our quantum switch has no definite causal order, by constructing a causal witness and measuring its value to be 18 standard deviations beyond the definite-order bound.

Sally Shrapnel  - Can machines teach us anything about causation?